As I am sure many of you are aware, Krispy Kreme have released a Nutella Doughnut.. Rather sneakily "leaked" through a "Confidential Internal Memo" marketing stunt which caused uproar all over social media. I wasn't champing at the bit to buy into this NEW Nutty Chocolatta but decided to bite the bullet along with a NEW and improved version of the Lemon Cheesecake. 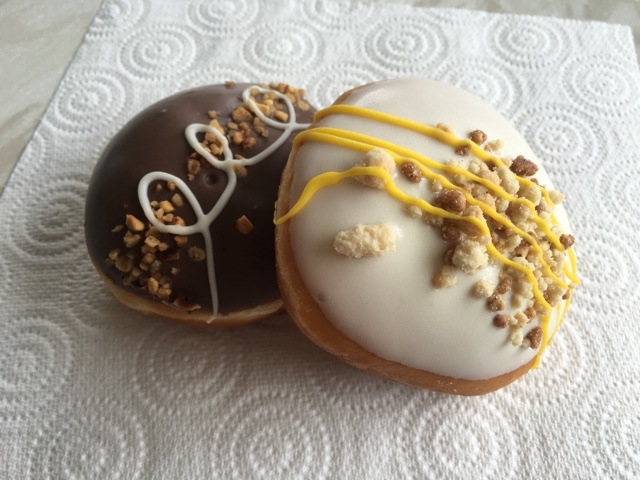 Both of the Doughnuts looked pretty darn flawless with a nice circular shape and a decent size - It's a miracle. I bought them as part of a trio box from my local Tesco Cabinet but individually they were priced at the usual £1.90 for the Lemon and £2 for the Nutella - KK know how to take our money! Hand dipped in cheesecake icing, with a lemon & cheesecake filling topped with crunchy biscuit and lemon sugar finished with a tangy lemon drizzle.

Fruity first and I wasn't sure what to expect - Aesthetically the doughnut didn't appear all that different apart from a moving in topping placement. Cutting in half, I was naturally disappointed by the amount of filling but held out in hope that more would be hidden inside - Thankfully in the right half, lemon was in abundance! A real zingy kick came from this with a ever so slight tang from the cheesecake goo which surprising did taste of cream cheese.. Well with some imagination, I mean. The dough incasing all this was up to the usual KK standard in being soft, fluffy and generally a delight. Topping wise, I tasted nothing listed in the ingredients, not even lemon - It was just plain sweet! Not bad and marginally better than last year - It's a 4 out of 5 from me. 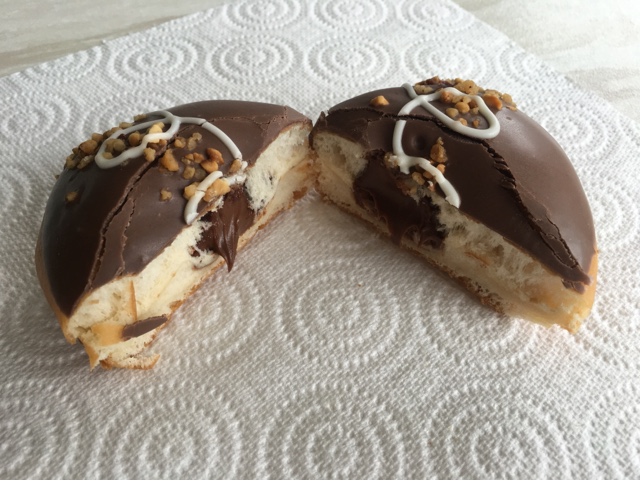 Nutella time and it smelt jolly good! Once again, the dough itself proved to be perfect with 0 in terms of stodge and certainly not dense. Amongst the fluffyness was a big old blob of the delicious chocolatey spread which was thick, rich and super nutty - More so than you find in some jars anyways! A generous layer of set chocolate coated the top and although it was pleasant enough, it wasn't exactly anything to get excited about. Contrasting to all the soft were the nibs of hazelnut for that final boast of nutty flavour, to round up things nicely. Decent enough but just Nutella in doughnut.. I didn't faint, dribble or scream - It's a 3.5 out of 5.

At the risk of sounding like a right Debbie Downer*, these 2 NEW offerings from Krispy Kreme are alright hence the marks.. But really nothing special. By no means is there anything wrong with them.. The Lemon Cheesecake tastes of lemon and the Nutty Chocolatta tastes of Nutella but they are hardly going to change ones life - Heck, any fan of the aforementioned has probably already put the spread with a KK to get their fix! Now, if only I could find the Berry Pavlova.. I really do have high hopes for that one!

*I would just like to formally apologise to my Debbie Downer of a twin, NibsnScribs who I failed to tell I had these Doughnuts. As she is the Peanut Butter Queen, I suggest you all go and pester her for a review of the NEW Reeses PB & Jelly, leave her a nice comment for me and fingers crossed, reap in its glory!